Following on from our news that Carole was competing in this year’s London Marathon, we’re delighted to report that she did it!

Carole was one of 5 local women from Kendal running club ‘Women on the Run’, who completed the marathon who raised money for 5 different charities. Individually Carole raised £1,500 for Mind. Congratulations to the group and thank you to everyone who supported them along the way.

Carole prepared the below wording for the running club newsletter:

By January 2019, 5 of us from Kendal WotR had signed up for the London Marathon, all running for 5 separate charities.  We called ourselves the Not-So-Famous Five and embarked upon our 16 weeks of training with apprehension and trepidation. Only one of us had run a marathon before, but we all knew we had a lot of work to put in, and a lot of hours needed to be spent running, hill training, interval training, cross training – you name it, we did it.

We were also fundraising for our charities, so we decided to do a couple of joint events and split the proceeds between the 5 charities.  These events were a Pie and Quiz night, and a Virtual Challenge for April.  Both seemed to go down really well with our Kendal club as it meant each person could sponsor everyone equally.

We all wanted to run the marathon for different personal reasons and we all found out a lot about ourselves and each other on our many and varied training runs.

Some of these runs, by necessity – being away from Kendal / just getting the mileage in / all the usual day to day things – we had to do on our own.  We all found this really hard and lonely, but fortunately these solo runs were not very often, because we had the most amazing and fantastic support of everyone involved with the WotR Kendal group.  Not only did we go out twice a week on our usual runs with them, but more often than not, many of them would turn up on a weekend morning at the Leisure Centre at specific times, and run with us, in all weathers, so that we wouldn’t have to run alone.

So, come Marathon day itself.  4 of us started in the Red Wave (for Charity entrants), 1 in the Blue Wave (for Ballot entrants).  We were nervous, excited, apprehensive and emotional, but looking forward to the event itself and wondering what the day ahead would bring.  We all had friends and family members dotted around the course to look out for, and we knew that “back home” the ladies from WotR Kendal group were stalking each of us on the Marathon App.  We wouldn’t let ourselves or our amazing supporters down.

We all wanted to get round the course, finish and not worry about the time – just to enjoy it and soak up the wonderful atmosphere. And what an atmosphere it was. Colourful, loud, cheering from everyone and anyone.  It really was just like you see on the TV, only better!

We created an I-Spy Checklist of the day, which included seeing, at various points around the course: Rhinos, Spiderman, the Eiffel Tower, Batman, Superman, Superwoman, a Minion, the Pink Panther, a crocodile, a kangaroo, Paddington Bear, Jesus carrying a cross and running barefoot, Thunderbirds (in a Thunderbird vehicle), paramedics (in an ambulance), a dinosaur, and many other people in crazy costumes and colourful outfits.  It was mad, it was crazy, it was bonkers and it was absolutely fantastic.

We were privileged to have the actual experience of the day itself, but we all know that without the help, support and encouragement of everyone involved in the most amazing running club – Women on the Run Kendal – we would have struggled to get to the start line.  We would have done it, but it would have been made much more difficult without each and every one of them, and for that we owe a huge and heartfelt thank you.

We are no longer the Not-So-Famous Five, we are now the Fabulous Five – and we are Karen Rose, Ruth Buxton, Clare Feeney-Johnson, Tanya Bushell and Carole Whiteley. 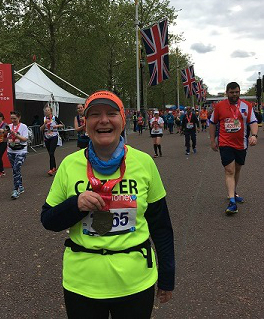 Read what our clients say

We first approached Mintcake when we were looking for quotes to create a new website. From the outset the whole team have been helpful and professional. The initial design brief and quote was informative and they involved us in every step of the website build. We had quite a few specific and often unique criteria for our website and nothing was too much trouble for the team.

“Working with Mintcake Digital has been a positive experience for our RSPCA Westmorland branch and we are really happy with our new website. Feedback from customers has been great and we have seen more interest from people looking to rehome our animals”

The service at Mintcake is fantastic – the team are so friendly, professional and quick.  I wouldn’t hesitate to recommended their services to any printer looking to delve into the world of web-to-print…keep up the good work!

I would certainly recommend Mintcake Digital to anyone that wants a responsive service with an easy to manage and up-to-date website.